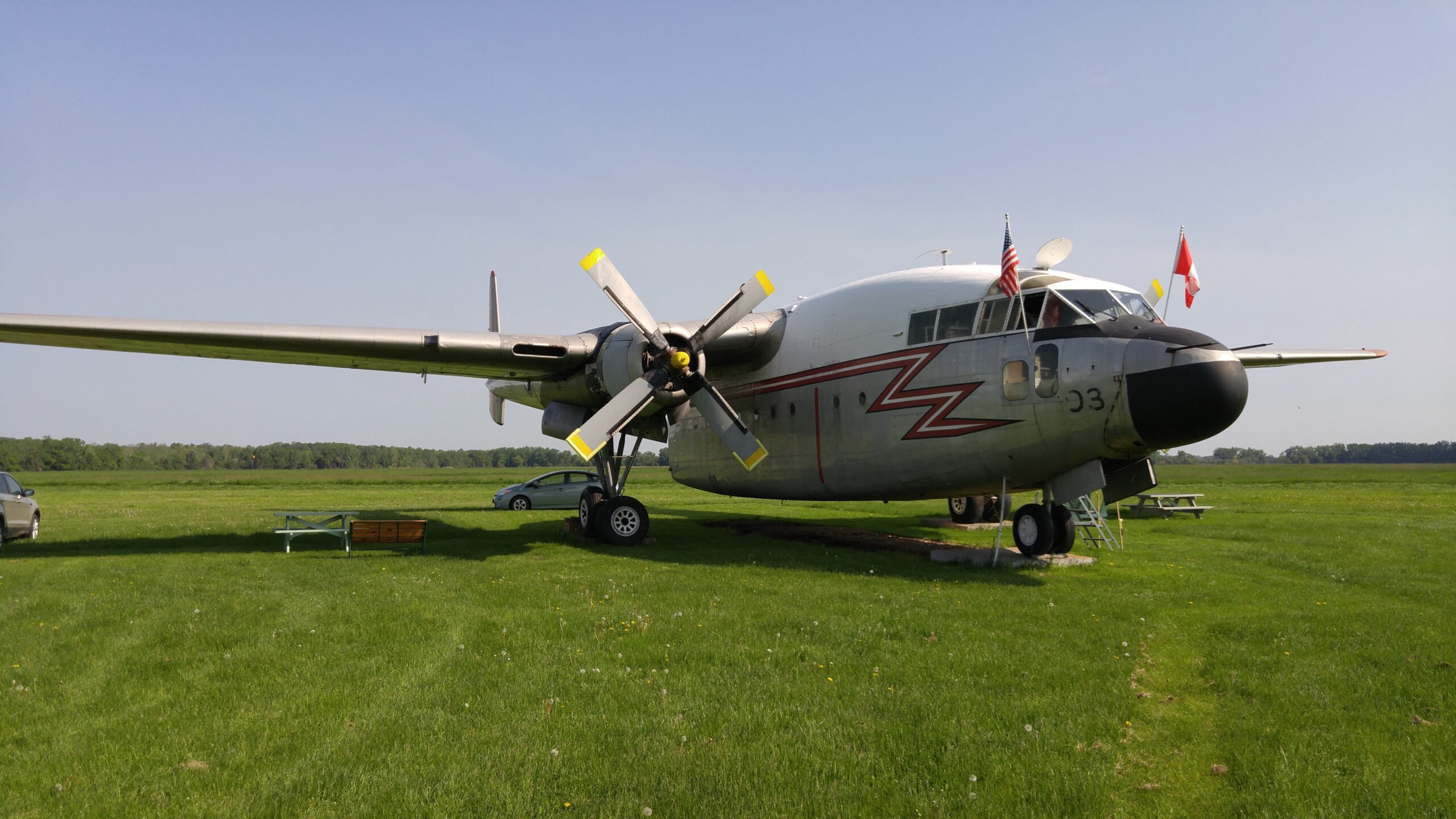 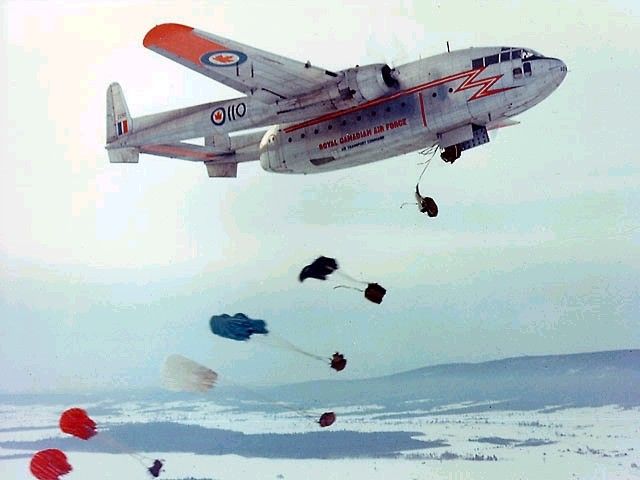 45 aircraft were built for the RCAF.  Our airplane was originally built for the USAF but delivery was not taken.  It was instead immediately transferred to the Canadians in 1952. Each C119 cost approximately $259, 171.

Our C119 came off of the production line as an F model.  It was upgraded to a G model by the Canadians in 1957.  The G is an F but with different propellers.  The -F had Hamilton Standard props, the G had Aeroproducts.  (see more in the Prop section)

The USAF modified their -G model aircraft for use as gunships during the Vietnam War.  The gunship is a side firing aircraft that would

fly a “pylon turn” around a target thereby keeping the target in sight and under fire at all times.  All of the armament was mounted on the port side of the aircraft.

The Boxcar did not have a great reputation for reliability. It was known to suffer from landing gear failures, propeller stress cracking, engine mount failures, propeller assembly oil leaks, poor single engine performance, and tail boom failure. The C119 was described as “thousands of rivets flying in loose formation.”

The USN operated R4Qs as air logistical support to the fleet and other Naval units in the European and Mediterranean areas.

The RCAF used C119s from 1952 to 1967 for transport operations, air resupply, paratroop ops, and medical evacuation.  The aircraft were also used in the Arctic regions for the resupply of military bases, weather stations, and radar sites, and it was used to support survey and scientific expeditions.

Our airplane was a part of the UN peacekeeping force in effect during the 1956 Israel and Egypt hostilities.  The RCAF provided 16 C119s and their crews.

The USMC used the C119 for heavy lift transport.  The USAF used the airplane in many capacities already mentioned.  It was also used for aerial recovery of high altitude balloon borne instrument scientific packages.  It was further used for the aerial recovery of film cannister space capsules during the Corona spy satellite program.

The last C119 was phased out of the US military in 1975 while flying with the Air National Guard.

The Flying Boxcar also played a significant role in the Korean War.  In particular, it was instrumental in the successful evacuation of US troops during the battle of the Chosin Reservoir.  C119 aerial resupply was normally done at a speed of 115 knots (normal cruise speed is 165) and at an altitude of 600-800ft above the ground into a 500ft drop zone.  Air resupply was critical in Korea due to inadequate roads, poor weather, and rough terrain.

The FAA shows our aircraft was originally built as an -F model. The nose on our plane was originally a small standard production nose.  When radar was installed sometime between August 1956 and August 1957 it was retrofitted with the big nose it now has.  The radar was the AN/APS42 search radar used for navigation, weather avoidance, and aircraft identification.

Our C119 was delivered to us in June to the museum in 1992.  The original acquisition agreement with the US Forest Service Fire and Aviation called for a flyable airplane.  The aircraft was flown in but then stripped of all airworthy equipment.  The Boxcar crew has taken this unflyable airplane and is turning it into something historic and beautiful.

Electrical: 28v DC system with a 24v battery and 2 28v DC engine driven generators.  DC power is converted to 115v AC thru inverters.  A 28v auxiliary power unit driven by an internal combustion motor is used to activate the electrical system when the engines are not running.

Our props are square tipped.  This allows for greater structural strength and a broader blade than rounded props.  Round tip props cause greater drag at high tip speeds.  Aeroproducts props were prone to uncommanded changes to fine pitch resulting in engine overspeed leading to possible engine failure or blade failure.

5 seats in the cockpit : 2 pilots, 1 navigator, 1 radio operator, and a flight technician in the folding jump seat.  In the cabin, a troop capacity of 42 (or 62 if center row seats installed) or 35 litters.